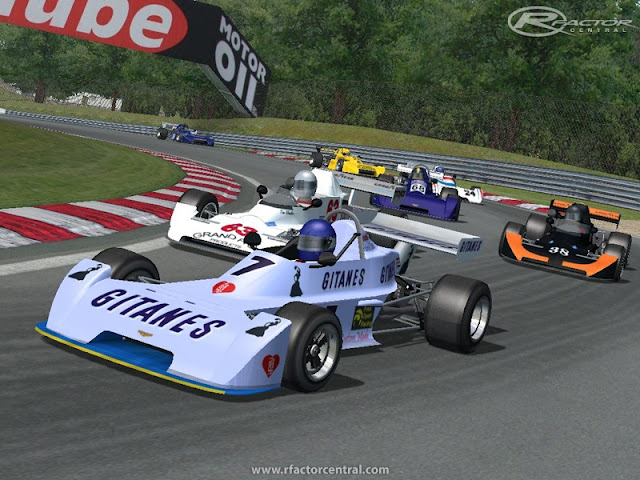 Extract the content of the archive file in your rFactor root folder.

By 1976 the Formula Atlantic was a well established and world wide spread formula. The biggest championships were in the United States, Canada and United Kingdom, but smaller series also existed in South Africa, Ireland or Australia.

The mod contains cars mainly from the 1976 IMSA and CASC Formula Atlantic series (respectively the US and Canadian series). However several cars are from the British and South African series. Many future F1 or Indycar stars drove in Formula Atlantic that year, such as Gilles Villeneuve, James Hunt, Bobby Rahal, Alan Jones, Patrick Tambay and many others.

This mod is some sort of a big upgrade from the original Formula Atlantic mod from David Sabre. It comes with brand new physics for each chassis, lots of new historicaly accurate skins and graphic updates from David Sabre himself.

The Formula Atlantic cars are lightweight single seaters, powered by 1600cc Ford BDA engines, developping between 190 and 210 horsepower. Indeed, many engine tuners had a go at tweaking this engine, with various results. With so little power and weight, a 10 HP difference can make a big difference, and the engine at the back of the car will be almost as important as the chassis itself.

To make things easier, we spread the engine tuners into 3 different power outputs :

There are 6 different chassis in the mod. The fastest car is the March 76B, followed by the Chevron B35 and the Lola T450. The Ralt RT1 and Boxer PRA76 are average cars, and the outdated March 75B is the slowest chassis of the mod. But all in all, cars performances remain pretty close, only a March 75B with a 190 HP engine will be really struggling to keep up with the rest of the pack.

All cars are equiped with the same Goodyear tires, coming with 2 compounds, soft and hard. Soft tires should be good for 40-50 of racing but will suffer from heavy wear at that stage, while hard tires will have no problem with a 60-70 minutes race.

III. Thanks, sources and acknowledgments :